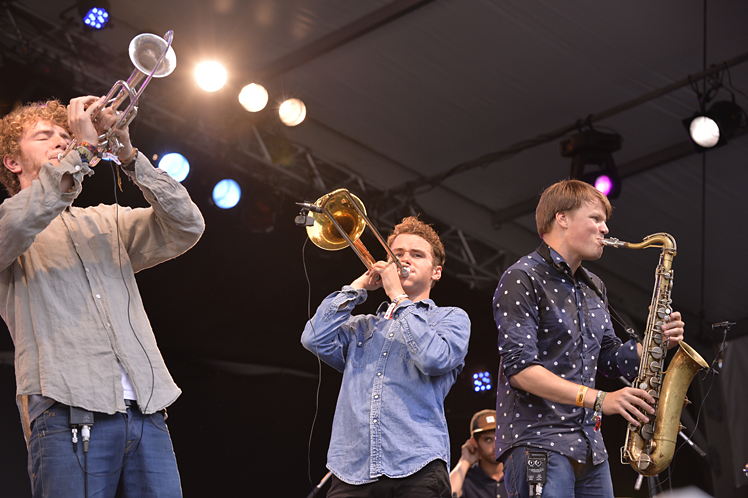 Jazz for the new generation

Jungle by night was a band I was very much looking forward to seeing, leading up to this set they played on the Orange court on Sunday morning I had previous done a Q&A with the sax player Pieter. I also watched their late night set in the Crystal palace stage the night before where afterwards I got a chance to talk to percussionist Gino. My feeling about this group of 9 lads from Amsterdam is they are taking jazz back to where it belongs. Jazz started as music the youth listened to, it was exciting, fresh and more than anything else music that people danced to. Something happened to jazz over its evolution and often times the jazz scene can be pretentious or stuffy. I’ve been to many a jazz club, where talking or moving up out of your seat can get you kicked out. This is not how jazz music should be and Jungle by night are here to remedy the misdirection jazz has taken over the years.

Jungle by night doesn’t play jazz in the traditional sense, they have 9 members including a percussion section that plays afrobeat and Ethiopian sounds mixed in with funk, soul and traditional jazz.
I think I have a pretty good sense for what Jungle by night is about at this point. They represented themselves the best on the Saturday night slot at 1:30 am in the Crystal palace where everyone was feeling a little loose, drinks were flowing and asses were shaking. This review isn’t of that particular set, but the one the next morning at 11:30 am. However to better understand the band I have to reference both performances.

If Jungle by night simply stood on stage and didn’t have much of a stage presence they would still be an exciting new sound. What really makes their live show special is how they interact with the audience. They have a superb ability to hype the crowd up, make them jump up, shake around and more than anything have a good time. Their trombonist Ko Zandvliet rocks the mic like a seasoned pro; he leads the crowd through many dance moves and shows us exactly how its done. On Saturday he had us jumping to the ceiling and gyrating our hips, while on Sunday morning with the mountains in the distance we were all doing mountain climbing dance steps and then grooving back and forth. They also prepared a special tune just for Japan, it’s their hyper funky version of the theme song from the anime “Oyoge”. It’s before they play this tune that percussionist Gino gives a little spiel about his love of Japanese anime and how we should all sing the theme song together. This always results in JBN pulling a few people up on stage to help them sing it. This worked really well in the smaller confines of the Crystal palace.

These guys are living the dream, you can see giant smiles on their faces as it kicks in they are travelling the world rocking crowds of people, making everyone lose their shit and get wild. They have no fear, they are insanely talented and most of them are still under 20. They often bust out ridiculously complicated solos like they are just jamming back home, trying to outdo one another. The trumpeter, Bo Floor, in particular often has the guys in awe of his skill. The sky really is the limit for these guys, most of them are continuing to perfect their craft at music conservatories and some have a few side gigs such as acting. We can only hope that through it all Jungle by night continues to grow stronger and keep jazz fun.