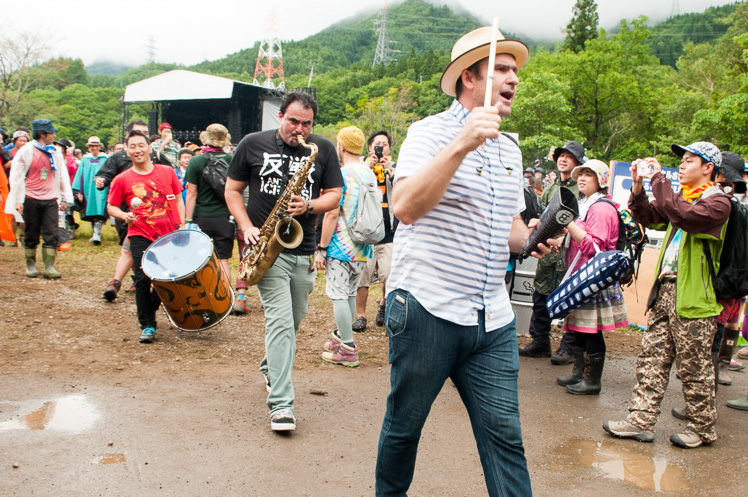 Just before Ozomatli takes the stage, we get the first rain of the weekend. No problem. It takes the band about three seconds to get people jumping. They’ve been at this game for 19 years now, so they can rev up any audience — even at 11am in the rain.

They’re only three tracks in before Justin Poree is hurling his drumsticks into the crowd, grabbing spares, drumming on, hurling them, grabbing more, and so on. Everyone likes free stuff.

Their latest album is called Place in the Sun. Well, that ain’t gonna happen for us all today. But there are some obvious festival winners on the album, including the cheery title track and the beautiful “Believe”. We don’t get either of them, sadly. They’ve chosen to play “Paleta” instead – a more frantic party number.

Then, right as the thunderous beats of Saturday Night start up, the weather seems to notice we’re going heavier, and starts to pour down. We put our hoods up and keep jumping.

Then they ask if we’d like to get a bit wilder and play a crazy version of “Nada for Free”.

Suddenly there’s an extra member onstage. They’ve invited Rovo’s Yuji Katsui to join them, and for a while his electric violin adds a little to the Ozomatli tunes, but then he gets a couple of minutes to show off. It’s not often you hear a violin solo at Fuji Rock.

“Japan is our favourite country in the world to come to,” says bass player Wil-Dog Abers. I bet he says that to all the countries. Drummer Jiro always seems happy to be here. In fact, that man never stops grinning. He’s beaming from the start to the end of every show I’ve seen these guys play. His cheeks never tire.

They take the tempo down a little for “After Party”, and then they start their traditional after party. They pick up their instruments, climb out in the crowd, and try to keep going as the mosh pit closes in on them. As the stage hands start work preparing for whichever poor bastards have to follow this set, Ozomatli leads a procession of fans across the field, finding a new home just in front of the T-shirt tent, and carry on. Their time slot finished ages ago, but they aren’t going to stop playing. Eventually they do, though, obviously.

It’s a shame we didn’t get more of the new album, but they’ve got six records’ worth of material now – seven if you count the one they made for kids – and it is, as they say, all killer, no filler.