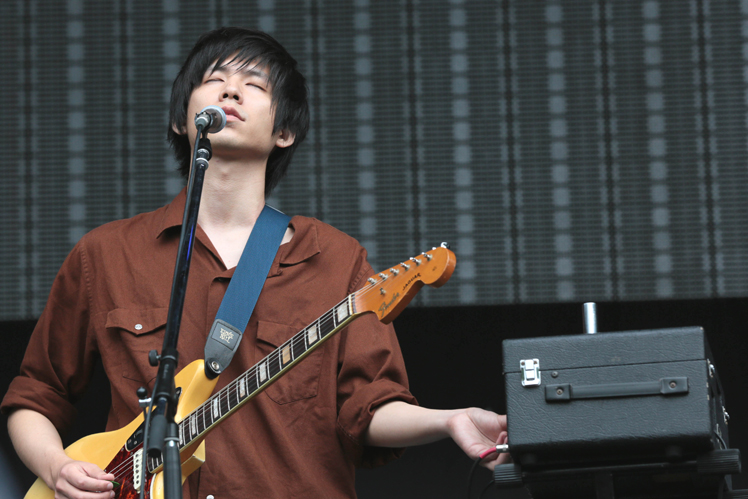 Get Ready to be Transported to a Different World

Though they are influenced by ’60s and ’70s psychedelic rock, what Ogre You Asshole creates is something new and different. When we talked with them earlier this month they spoke fondly of their previous Fuji Rock appearance in 2010 at the Red Marquee, and how much they looked forward to doing a show in the open air this year.

As soon as they started to play an energy buzzed around the stage, entrancing everyone around it. Long and languorous guitar riffs coupled with tight drum and bass and Manabu Deto’s hypnotic vocals create a powerful magic that draws you in and keeps you under its spell until it stops. After every song people seemed to wake up as if from a deep sleepーthey suddenly became lively, loud and talkative. That’s not to say that people weren’t active while OYA playedーquite the opposite. The musical composition of their work has so many different layers and aspects that fans can move in any way they want and they will still be in tune with the rhythm. Case in point: There were semi-swayers, full-on screaming swayers, a couple of fist pumping girls, dance-like-you’re-at-a-techno-party dude, and sit-in-my-comfy-chair arm wavers. OYA’s music offers a freedom of expression that doesn’t come easily to most bands in Japan, where movements are often rigid and decided in advance, and everyone generally does the same ones. Songs like these allow listeners to do what they want, in the way they want with no judgement or comment.

Describing OYA’s performance is a little bit difficult as the best parts of the experience is intangible, but perhaps the best way would be to say that you’re left with a warmth and fuzziness inside that makes you smile for the rest of the day, because it’s true.