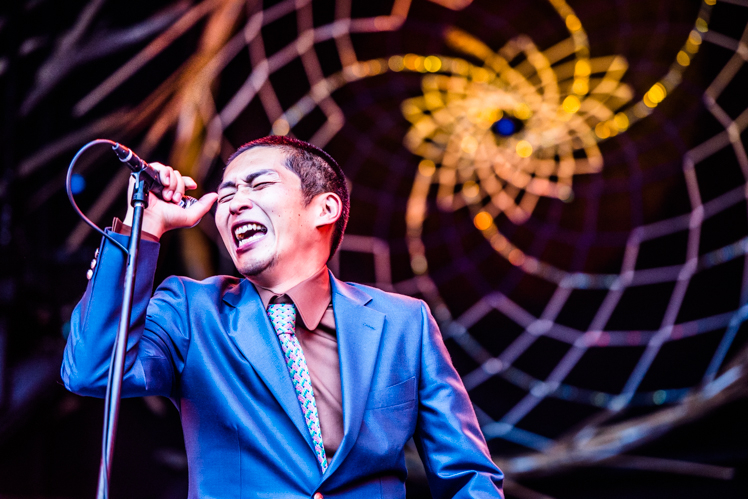 I came into Osaka monorail at the perfect time; I was feeling haggard, the rain had started a little, I needed a pick me up and this band did the trick. They are the Japanese carbon copy of an American funk/soul band from the 1960′s. In the hands of a less than competent band leader this could come off as gimmicky or cheap. However front man Ryo Nakata plays the part perfectly. Close your eyes and get transformed back a few decades.

Together with his band they play and look the part of an authentic 60′s soul band. Nakata and crew have the sharp tailored suits, he has the sexy dance moves and he also has the gritty voice constantly barking out calls to both the band and the audience. “Can ya do da funky chicken?”, “huh…huh…”, “Ima show ya how ta do da funky chicken”. Next step, Nakata and all of us to our delight engage in said vintage dance move.

Complex poetry commenting on social issues it is not. But, who said music always had to be complicated, dark and mysterious. This is fun, uplifting, shake your ass, chicken noodle soup for your soul kind of music. If someone told you we could reincarnate Rufus Thomas or James Brown and put them in the body of a Japanese guy leading a team of equally talented musicians this is not something I would pass up.