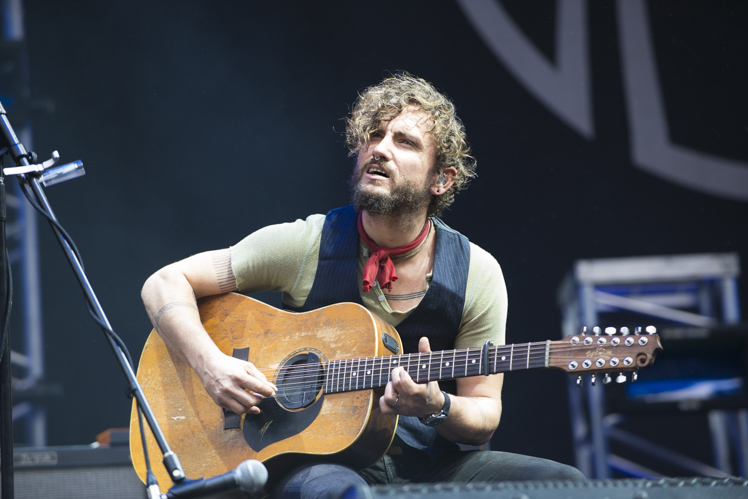 It may have started raining but that doesn’t dampen the crowd’s enthusiasm, who cheer everytime the pre-show piped music stops despite the roadies still fiddling with their instruments. But eventually, the man himself John Butler comes onto stage to many screams and much clapping, accompanied by bassist and keyboardist Byron Luiters and perpetually grinning drummer Grant Gerathy. They warm up with a short piece, John on banjo almost duelling himself. But then it’s straight into the music with the insanely catchy ‘Better Than That’ showing off the wonky, bright sound of the banjo.

From there, it’s onto “Don’t Wanna See Your Face” on acoustic guitar and slapped bass. It’s here that John’s intricate fingerwork on the guitar really starts to show through, the crowd cheering at the slightest hint of a solo. This piece winds up with an instrumental flourish, with duels amongst the instruments pushing each other ever further in complexity and concentration. With those crowd favourites out of the way, we get a taste of the band’s more recent material with ‘Blame It On Me’. Featuring John switching to electric guitar (as has been the trend with his newer material), it features reggae hints such as echoing percussion and skanking guitar, with the middle actually a fairly experimental reverbed solo.

The undisputed highlight of the set was the next song, the ten minute long ‘Ocean’. With his bandmates leaving the stage, it’s simply one man, one acoustic guitar, one bass drum pedal and a sea of sound. Using the guitar’s body as percussion, the song slowly develops until the melody and rhythm are almost indistinguishable as the blissful sound echoes and winds around the mountain stage. With each finger hitting a different string, John weaves an entrancing web of melody and rhythm. It ends with electronic elements coming in and with a calm withdrawal, leaving the audience cheering for a good minute afterwards.

‘Pickapart’ starts with incredible fast fingerwork, John’s long nails flying across the nylon strings of the acoustic. The drums start simple but get more freedom as they go along ending in a drum solo that really shows the amount of rhythm Gran can conjure from his simple kit. The crowd karaoke of ‘Zebra’ gets the crowd back to their excited state and then much to their disappointment, the set’s finish is announced. It’s seen out with a hippy rock song about living in a city, one that particularly strikes home up here in the mountains away from Japan’s normal lifestyle in crowded metropolises.