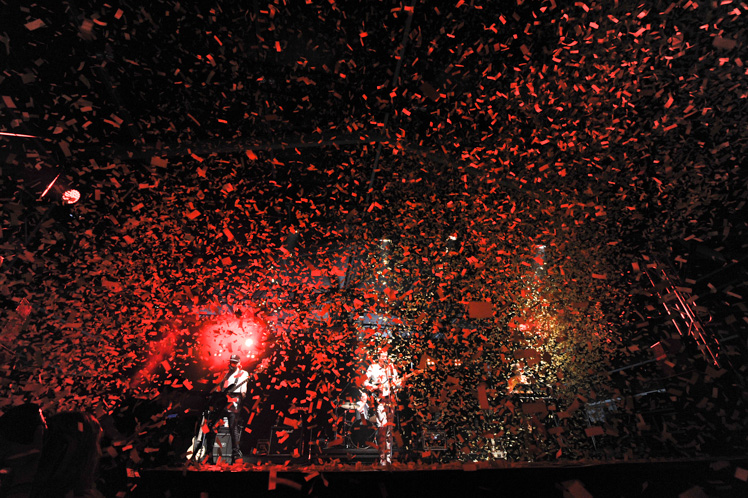 In this age of the selfie, it’s getting pretty normal for bands to take cell phone pics of the crowd. OK Go frontaman Damian Kulash was so intent on it, he had to try twice, the second time explaining, “OK let’s try this one more time. Let me try to find the camera on this phone.”

OK Go’s Sunday afternoon set at the Red Marquee was fun, even if the music was formulaic, domesticated white-boy funk. The band’s strength is a buoyant attitude, its quirky sense of humor and its penchant for irony. Lyrics shine through, like random bits of someone else’s conversation you weren’t supposed to overhear — “got a body like a battle axe / gonna buy you a Cadillac.” The song “Skyscrapers” is a hyper-emotive please-forgive-me song directed at tall buildings:

This kind of highly self-conscious Freudian dislocation is downright hilarious, but it hits you late, and you chuckle to yourself after the fact, since it is so understated.

The one enormous suspicion one cannot help but feeling going to see OK Go live is that this is a band famous for their highly innovative music videos. While they are hardly mind-blowing, they are credible performers, and giant blasts of confetti kept the crowd into it.

The set consisted of both their hits, as well as several new songs that will appear on their new album, Hungry Ghosts, to be released in October. One of the better new tunes was “Obsession”, which is underpinned by a catchy bassline and features the lyric, “head is beating like heart, heart is beating like a drum, so go ahead and jump!”

Crowd photos aside, Kulash also ruminated aloud as he gazed out over a crowded venue. “Playing Japan is the best because you guys are so focused. Everyone here is laser focused,” he said. “Playing England, everyone is… wasted.”