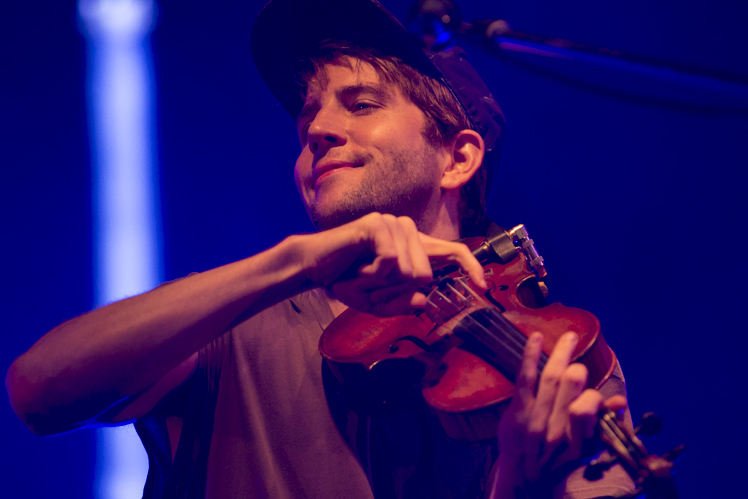 After a sprawling, monolithic set full of steel drums and paper-mache-heads, Arcade Fire’s touring violinist, Owen Pallett, stepped into his own spotlight at the Red Marquee on Sunday. A sprinkle of rain may have been the reason the venue was full to the back, but then again, maybe not – something about Pallett’s shockingly complex blend of pop and classical is mesmerizing, as is his performance. During even the quietest of numbers, the only sound in the room was his music – the audience was silent, rapt.

Pallett is a classical composer, a Grammy winner (for the soundtrack to Her) and a sought-after arranger. His solo material is performed with his violin, a small synth set-up, and looping pedals. He doesn’t merely layer one violin line on top of another – as fine as that might sound – but rather he uses his violin to create full arrangements. A series of pizzicato runs, some thumps on the wood with his thumb, and Pallett has suddenly arranged a rhythm section atop which he sings and plays gorgeously (unless he’s going for non-gorgeous discordant unease, which he enjoys from time to time). Pallett’s solo show is almost the opposite of Arcade Fire – intimate and compact, with all the complexity of the music borne of the mind, fingers and feet of one man. Watching one person build a pop symphony out of individual sonic pieces is fascinating, and Pallett’s talent makes it look easy.

Pallett is likely aware of his gift, but he doesn’t act as though that’s the case. His voice was strong, and his demeanour casual, suddenly appearing in a cap and T-shirt as though he was rushing in late. His said little, but his ease was apparent; announcing at the start of one song “this one’s hard,” he gave up on it twice with an aggravated “argh!” The audience laughed – but when he finally hit the pedal to bring that ‘hard’ part back into the arrangement, the crowd erupted in cheers.