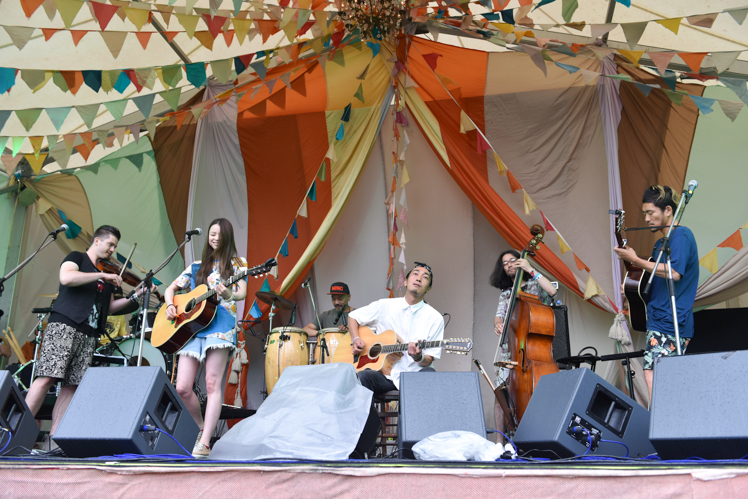 The set starts twenty minutes late while being first on stage, a nearly unheard of thing at Fuji Rock. It is a nice rest for the non-campers like me who have made the hike over to the little-known Pyramid Garden stage nestled behind the Prince Hotel but all the same time, it’s waiting in a wet field. The six-piece band does get started eventually, with rippling acoustic guitar glided accross with timid violin and punctuated by the soft peal of Jamaican steel drums. It has the feel of a chilled lounge room jam, guided by the voice of the American-born Martin.

The second song starts with stamping rhythm as the violin soars and swings over everyone else. It’s half an Irish jig with a beautiful folk lilt to it. The band takes a break, with vocalists Toshi-low and Martin chatting in Japanese. It’s a comfortable ramble about the festival, the band and last nights stuff that goes for about 10-15 minutes. Yet it fits the set perfectly, the relaxed atmosphere of the crowd drinking it in and laughing occasionally. Despite their jokes that this was the rest of their one and a half hour set, they continued with the music with dancing veils of acoustic guitar over a thumping bassline.

The percussion from Ronzi and Kakuei is rock-solid, accentuating other instruments’ movements and supporting the piece’s overall structure. The guitar of Kohki and violin race each other over a folkish piece as proof of the band’s technical ability. The set continues in this way, a few songs followed by a break for the conversation to continue (including requests for the crowd to go fetch whiskey and chatting about the weather). They’re also joined by guests throughout the set, including a mouth accordionist and a female vocalist that add even more variety to the band’s sound. With a sound that’s sometimes folk, sometimes pop and sometimes in-between, you can be assured of one thing; it’s always beautiful. And by the end of the set, the 20 minute wait was almost worth it.