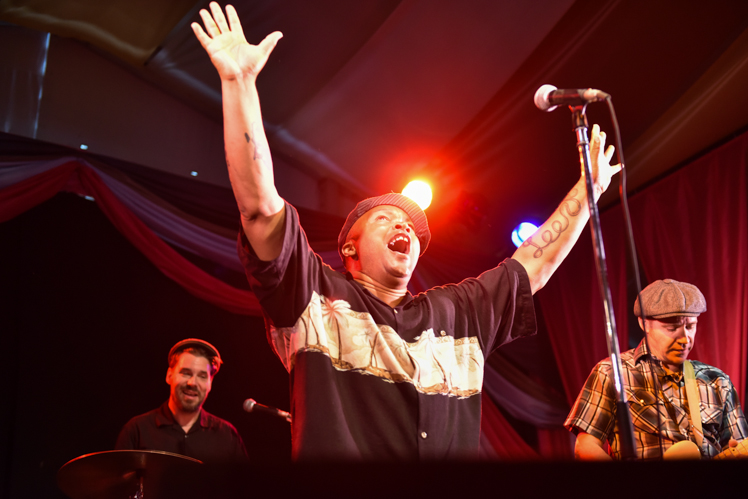 Black Kat Boppers will have made a record 5 appearances at this year’s Fuji Rock, a figure which I believe tops Big Willie’s Burlesque who performed 4 times this year.

Speaking to Willie McNeil after Fuji Rock concluded, performing so often can take a toll on an artist, sometimes requiring a little extra inspiration in bottle form. And sure enough, the smell of this delicious elixir wafted throughout the Cafe de Paris as the Black Kat Boppers took the stage. Fronted by vocalist Roy Phillips, his powerful voice cut across the crowd easily, as almost everyone in this venue seemed to be sipping a mojito.

Guitarist, John Best, then leaped into a guitar solo with taste and gusto, drawing lots of applause from the audience. Dylan Clark kept time on double bass and soon the whole cafe was rocking. The dance floor seemed to erupt in a sea of dancing and hand clapping when the tune “Baby My Lovin’ Is True” was played, and there was true joy in the room.

The only drawback of the performance today was many seemed unfamiliar with the band, though they would be quickly won over by these catchy tunes once the show was over. And they will forever have the sweet, beautiful memories of one day sitting in a cafe in the beautiful hills of Naeba.