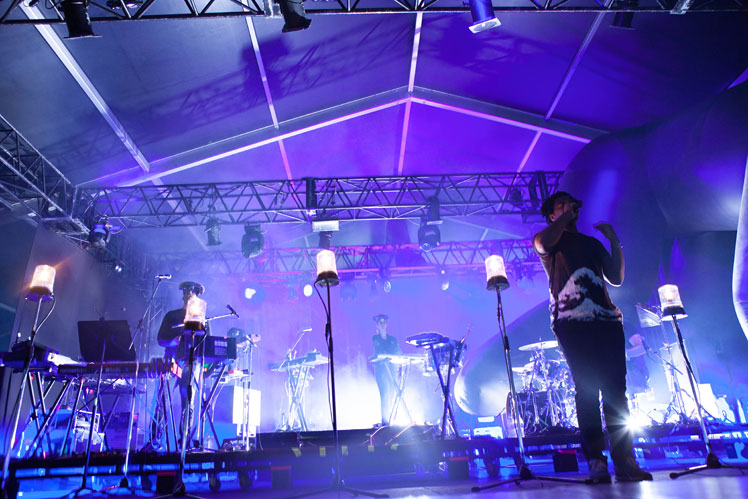 SBTRKT made his Fuji Rock debut in 2011 shortly after the release of his eponymous first album. With his “Wonder Where We Land” sophomore effort set to drop in September, the acclaimed producer returned to Naeba for his second appearance at the fest.

On Sunday evening in the Red Marquee, SBTRKT had one of the strangest stage props at Fuji Rock 2014. It was a massive blow-up bear that filled nearly a quarter of the stage completely from front to back and top to bottom. Unfortunately, this made it really challenging for those standing near the front on the right side of the Red Marquee to watch the show. It’s not too often were backing up gives you a better view of a gig, but that was certainly the case with SBTRKT!

Two other musicians joined SBTRKT mastermind Aaron Jerome as he played material from his 2011 full-length and new tracks like “Look Away.” Frequent SBTRKT collaborator Sampha was also on hand to soulfully croon along to several cuts. A solid set from start to end, SBTRKT kept the Red Marquee pretty much packed for his entire performance. Even those with a limited view on the right hand side of the stage were happy to stay put and groove along to the cool electro tunes being turned out.