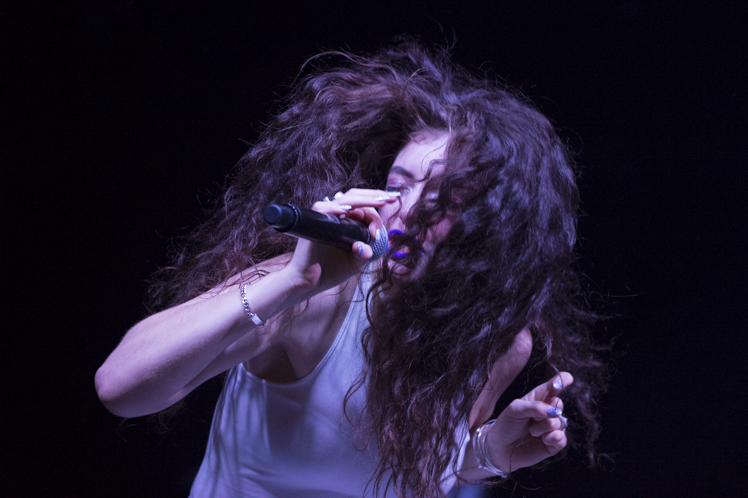 Of course the biggest screams of the set came for that song…New Zealand singer Lorde stormed international charts and created a whole new fandom of online pop fans thanks primarily to her single “Royals,” a playground smacker about never being able to pop Cristal or walk tigers on gold leashes and instead embracing being regular. It was one of the biggest songs of 2013 and presses on today, so it isn’t really a shocker that once the young performer rolled through that song, lead the crowd in a bit of call-and-response fun and finished with one final acapella version of the chorus that a large chunk of the crowd started making for the exits. To be expected, especially with two other headliners about to kick off.

Yet everything that happened before that song also highlighted that Lorde has something special about her stretching beyond a single song. The fans packed the Red Marquee tight for her set, and whooped it up at nearly every number she sang and every word she muttered. And it wasn’t the courteous sort of applause, but legit hyped-to-be-here expressions. The 17 year old helped her cause by being an energetic presence onstage – she sold every line, and wasn’t afraid to get as close to the crowd as she could, stirring them up even more. Punters were psyched throughout.

They seemed jacked for every song too, even if that’s the one territory Lorde still needs to develop a bit more. Joined by a drummer and synth/keyboard player, her songs are mostly minimal, artsy affairs, full of back-tracked Lorde’s singing behind her all ghostly like. Songs such as “White Teeth Teens” were skeletal affairs, more subtle groovers than outright release. Better suited for the crowd was “Tennis Courts,” a similarly bare number, but one featuring a good chance for fans to get into it (“yeah!”). She also worked in a cover of The Replacements “Swingin’ Party,” one turned appropriately moody for her. They were interesting constructions…but it could lag at times.

Still, she has some great moments. She prefaced the song “Ribs” with a monologue about what a monumental moment this was to her, comparing Fuji Rock to Coachella (which she played earlier this year) and then elaborating on how scared she was entering a profession like this one, and how she was afraid of growing old. “Ribs” hit on all of those themes too, but in a dramatic way, the highlight of her set and one that had large chunks of the crowd excited. And, of course, that song.