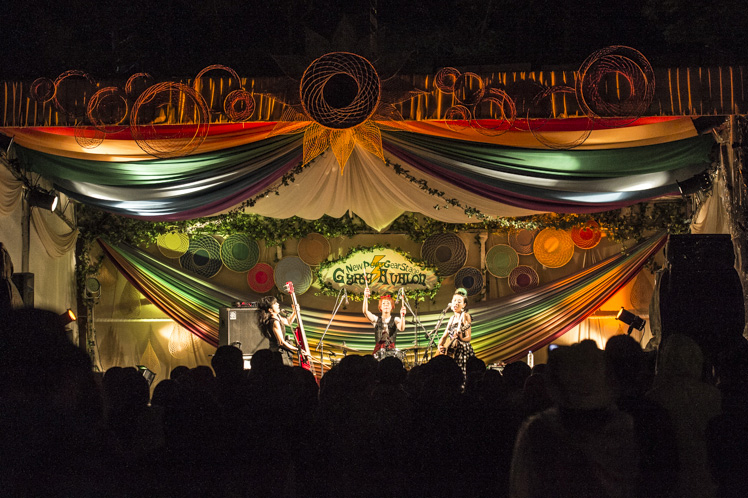 The Lipsmax are a fairly new all-female rockabilly band from Japan, which in and of itself makes them potentially interesting just for being something different. The group – decked out in ’50s attire – came to the Gypsy Avalon stage in full rockabilly fashion; the drummer stood behind the kit, and the bassist played an electric stand-up bass (not entirely authentic, but close enough).
From the first few numbers, though, it seemed as though the only thing that was truly rockabilly about the band was their look. The material appeared to be all-original, sung in both English and Japanese, and off the skip it only vaguely resembled rockabilly; that in itself is fine, but they certainly set up a different expectation altogether. Even the second number, as upbeat as it was, felt weak.

Vocalist LOVE has one incredible set of lungs (and an uncanny ability to switch from Nihongo to English with a perfect accent – somehow, an accent you’d associate with a 1950s American girl). The rest of the band were just as talented, so they kept my attention – luckily, as one by one, the songs improved. The vibe turned more towards authentic rockabilly, and the songwriting got stronger. It was as though the songwriting slowly caught up with the group’s obvious talent and enthusiasm, and that draw in the audience (or me, at least; I went from lingering on the sidelines with borderline disinterest to moving right up to the front of the stage).

By the end, as they played better songs, their energy and cohesiveness was undeniable. The Lipsmax were a good reminder that sometimes you have to give an act a chance; they just might be good enough to turn you around.