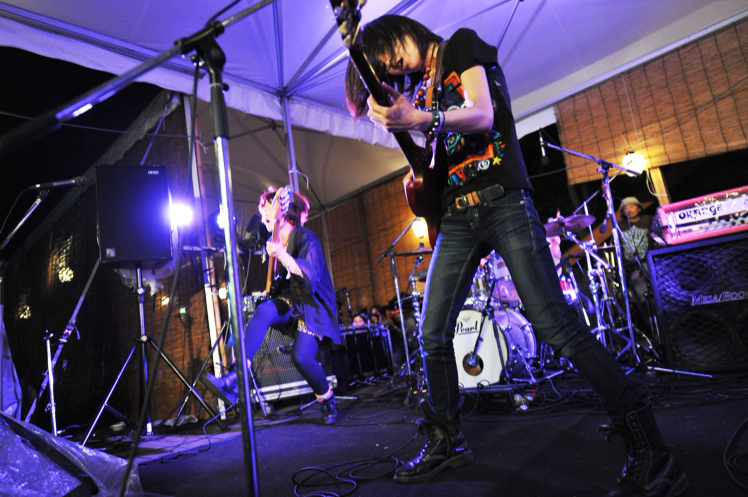 While pop princess Lorde was playing at the Red Marquee stage Sunday night, the Osaka all girl band Jinny Oops attracted a solid audience of their own at the much smaller Naeba Shokudo stage. The three-piece band played with the right spirit, making noise in the middle of the food court to a crowd who were dying to listen to rock.

The guitarist and singer Mitsuyo Ishibashi looked like she weighed as much as her instrument, but when the band started off with their song “Ichigeki Hissatsu”, she turned heads with her powerful voice. With the bassist and drummer both really letting loose, the tiny food court stage turned into a mini live house, complete with a group of fans jumping and dancing in the very front. After a couple of their original songs, Jinny Oops played a cover of Japanese indie folk duo Humbert Humbert, drawing in passers-by with their rock ‘n’ roll twist of the song.

Considering how well they played and the devoted crowd that formed by the end of their set, it was surprising that this was the trio’s only show at Fuji Rock. As they sang in one of their original songs, “when you’re all alone, there’s always music”, Jinny Oops is in it just for the music, and they don’t care where they play as long as they can play loud. Hopefully we’ll get to see the band rock the larger stage they deserve next year.