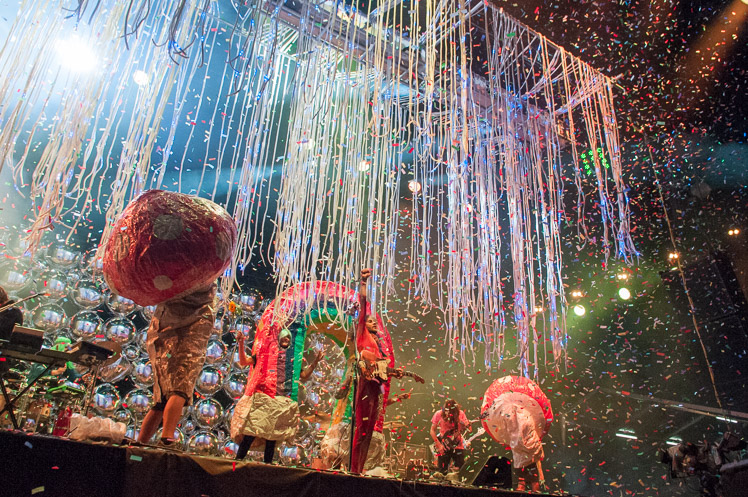 One thing I probably only passively noticed in all my years of listening to the Flaming Lips is that the creative kernel of the band is singer-songwriter style folk ballads, only the songs are extruded, magnified and intensified both musically and conceptually to a sort of glorious intensity, which now that the band has reached the status of a generational headliner — the 90s man! — is achieved on the scale of a grand stadium-sized spectacle. I always took the plaintive vocals-meets-piano-in-a-scratchy-recording intro of “The Abandoned Hospital Ship”, which opened their Fuji Rock set on the Green Stage Sunday night, as just that, a prelude, to a rock song. But the force of the distorted musical explosion that comes midway through is actually impossible without the four minimally delivered, emotionally wrought verses that begin the song, that could equally be sung by a guy in a bookstore cafe in Tulsa, Oklahoma on open-mic night: “Well, it took some time / ‘cause it’s a lot / God, it’s a bunch…” and all the way down to the denouement, “and I’m getting over it now.” What follows that lyric of course is an instrumental crescendo that is pure post-rock, though it dates to a time when post-rock wasn’t even a thing yet. The Flaming Lips music has always defied categorization, but seeing them live for the first time in 2014 really helped me understand all of those things they have come to mean, and put into the culture of what would eventually come to be known as “indie”, and that I really never quite got before, thinking of them merely as a band that I really liked with a great reputation for live shows.

Wayne Coyne took the stage in a muscle bodysuit, a bulked up red-orange thing showing muscles, ligaments, tendons and so on, like a medical chart of the musculature below the skin. There were two people in a tandem rainbow costume, and two others dressed as giant mushrooms. The Flaming Lips have been using pulsing rope lights to fantastic effect for a couple years now, and here they were hung from trusses above the stage, dangling like electric spaghetti. Confetti cannons blasted the crowd on the opener with multi-colored paper confetti. Glittery silver confetti came later towards the end. Coyne dusted the stage with a giant tinsel whip of his own and tossed his own pixie dust into the front rows. Before the first song, he declared, “We have the coolest people down here in the front dressed as weirdos from the future, man.”

But I those fans were just part of his tribe, and he was really talking about his own band and their vision. In addition to everything else that they are, The Flaming Lips are probably also all-time grand champions at Halloween costume contests, or else they are reliving the time when they had to play the Christmas tree in an elementary school musical. After the rainbows and mushrooms left the stage, they were replaced by other giant, inflatable costumes — aliens, a star-headed man, a giant smiling sun, a giant slugs with crowns and butterfly wings — all weird parodies of cartoons, the balloons of the Macy’s Thanksgiving Day parade, and the various detritus of American pop culture. In a way I was proud to see it. The pride came from seeing members of my generation realize this DIY pop culture pastiche in such a huge way. It was as if to say, “We know utopia is false, but we’re going for it anyway.”

After “The Abandoned Hospital Ship”, they moved on to “Yoshimi Battles the Pink Robots”, “In the Morning of the Magicians” and their version of “The Golden Path”, a song with their music but originally released by The Chemical Brothers. The rest of the 80-minute set was more introspective than I had imagined, a mix of Coyne’s emotionally intense and twangy voice, analog fuzz, majestic synth strings and all sorts of kitschy spectacle. During “Vein of Stars” Coyne went out into the crowd in a plastic bubble, which took a bit of logistics, as there is a 10-meter pit separating the stage from the security barricade, so security staff had to carry him across the gap and over to the crowd.

Throughout all of this, Coyne repeatedly told the crowd, “We love you. We love you.” It was a simple emotion, but sincere, and it is intended as a way of relating as equals to a crowd of 20,000 or 30,000 people. Coyne also gave props to other musicians, saying they’d gone to see St. Vincent and Yoko Ono on other stages, and “we went to a crazy end of the festival up some wooden path over there” — he pointed towards the Field of Heaven, the Orange Court and possibly beyond — “and met some freaky people. I don’t know what happened to them. I hope they’re OK.”

The odd thing about this set was that it lacked a climax, either musical or otherwise. It was instead a string of emotions and ironies and songs and bizarrities — kind of like the 90s themselves.

For the encore, Coyne and the Lips came back with “Do You Realize?” Is there another band anywhere that could sing such a tune as an encore? And that could sing, “Do you realize, that everyone you know someday will die?” and sing these lyrics in a way that is tinged with triumphant optimism? But perhaps that epitomizes the Flaming Lips. Unlike the bands that came before them, delivering stadium concerts as false epiphanies, they have chosen to become the progenitors of admittedly ephemeral, shared moments. It was funny, but every time Coyne said, “I love you. I love you all,” I believed him.