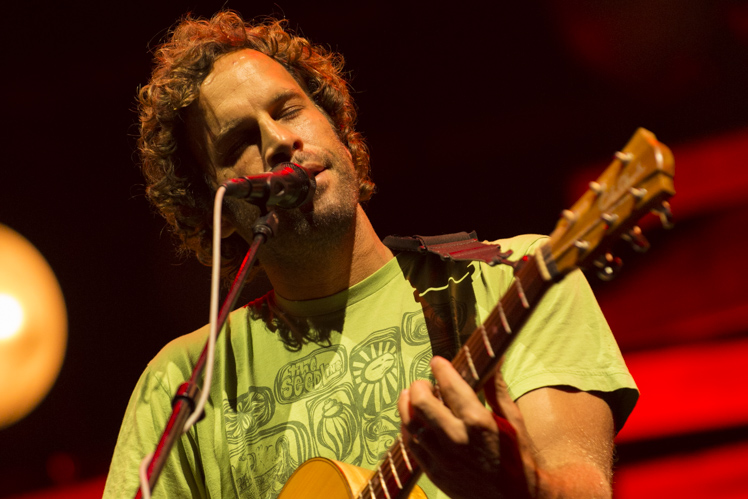 A little sunshine after rain

A misty rain did little to damper the spirit of those sitting in the audience watching Jack Johnson this evening. Onstage, the wooden planks he used as a stage backdrop even had large incandescent lights reminiscent of a sunset. On occasion, video scenes from Johnson’s native Hawaii, complete with palm trees, would be projected on the backdrop.

It has taken Fuji Rock quite some time to lure this international headliner, and many in the crowd were not going to let a little rain stop their enjoyment of this show. Many in the audience shared space with friends and strangers alike, with lots of head bobbing and even a few couples embracing during Johnson’s steady and buoyant beat.

As is tradition, Johnson appeared in jeans and a T-shirt starting the show with “Flake” and “Taylor”, his soothing voice winning over the audience. Later, it was “Radiate” and “If I Had Eyes” and going into the cover “Not Fade Away” made famous by Buddy Holly and others, but originally penned by The Crickets.

But then it was time to call out the guests and many screamed when he introduced John Butler to play “Breakdown” on his 12-string guitar. It was a magical moment, and that was most probably improvisational with little in the way of rehearsals. Another guest was Ozomatli who stepped forward to play “Staple It Together” with many horn players from the group taking their turn doing solos center stage.

And of course, he would close out the show with “Better Together” and despite the fact that there was no encore, a virtual impossibility given the tight festival schedule, many would long enjoy this excellent evening of music spent with Jack Johnson.