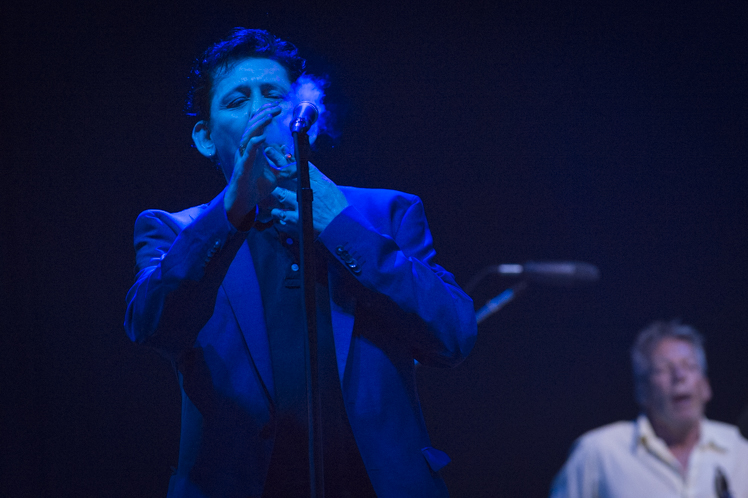 The Ghost of Shane MacGowan

Would this be the end of the road for the Pogues? This was the question on everyone’s mind as they awaited the Celtic-punk band formed in London 30 years ago.

Frontman, Shane MacGowan’s comments to UK media over the past month undoubtedly fueled the speculation. Earlier, he said he had only agreed to just a 1-date reunion which has stretched over 14 years. The annual tours have now left him exhausted, tired, and just fed up. MacGowan can’t seem to do anything without a healthy dose of drama, and even tonight’s performance is running 10-mminutes late according to my watch. The PA system has already cycled through warm-up music such as the Rolling Stones seminal “Paint it Black”, James Brown’s “Get on the Good Foot”, and the Clash’s “Straight to Hell.”

A simple black backdrop and blue stage lighting now await the final act of Fuji Rock’s 2014 main stage. A stage hand appears and sets out a wee little bar table near the lead microphone, topping it with 500cc of clear liquid and ice. This would be the elixir to lure a surly MacGowan from the wings. And soon enough the band would take their positions, and MacGowan would amble forward like an old cat drawn to a bowl of milk. The tilt of the glass, and the shortness of the sips indicate it is either vodka or gin: MacGowan’s siren and solace throughout his tortured and turbulent involvement with the Pogues.

Macgowan has a magnetism that is unmistakeable. Tonight he is resplendent and natty in a dark suit and freshly died hair. Similar to his previous performance at Fuji Rock years ago, he stutters the Japanese greeting “Konichiwa” and then it’s off to the opening romp, “Sunny Side of the Street”, harkening back to the band’s breakout fifth album which won over listeners in America and elsewhere. Accordionist James Fearnley shows no signs of age, jumping off the drum riser and landing on his knees, bopping around the stage easily to this well-known hit.

A prompter at the front of the stage would ensure that MacGowan wouldn’t forget a lyric, though he dosen’t seem to need the help, singing most of the lyrics with his eyes shut. The second number is another uptempo late-Pogues hit, “If I Should Fall from Grace With God.” The crowd bounces along, and a flag of Ireland flutters in front of the stage. Fearnley’s accordion playing adds a bouyant kick, and the rest of the band are no slouches with Jem Finer keeping excellent time on banjo, and Darryl Hunt laying down a great bass line.

MacGowan now needs a break, exiting stage left while introducing tin whistle player and part time vocalist, Spider Stacy, who will step to the microphone to lead “Repeal of the Licensing Laws” and “Boys of County Hell”. But soon enough, MacGowan would reappear, taking yet another turn at the front, introducing the slow eulogy, “The Body of an American.” The song’s main refrain “Fare thee well, there’s nothing left to say,” seemed prescient, given the age and tribulations the Pogues have endured, including the untimely tragedy that has befallen past members. This song ends in a drawn out Irish reel at the end, with MacGowan turning his back to the stage and finding a drum stick to tap a drummer’s cymbal to draw the song to a close. And with that, it was offstage again for MacGowan, momentarily forgetting which direction to go. Spider Stacy once again stepped to the microphone to lend his raspy voice to the song “Jesse James.”

MacGowan’s energy seemed to grow as the performance continued, and now it was hard to keep him offstage. He hurriedly returned for the number “Dirty Old Town” clearing his throat and spitting out a wad of phlegm before launching into the full-throated vocals. This was followed by “The Irish Rover.” And now as the concert was nearing the 1-hour mark, many were guessing which songs would close out this incredible set.

“Rainy Night in Soho” was the penultimate number, perfectly suited to the blue stage lighting and MacGowan’s somber demeanor. As the set drew to an end, MacGowan and the band seemed to savor the moment, and they saved the energy for one final rousing number and set closer, “Sally MacLellane” with the entire audience joining in with the chorus “I’m sad to say, I must be on my way, so buy me beer and whisky for I’m going far away.”

And with that, it was over.

A pair of emcees came onstage and exhorted the crowd for an encore, but considering the obstacle of old age and hard living, it was quite evident that MacGowan and the Pogues had already left everything they had on stage.