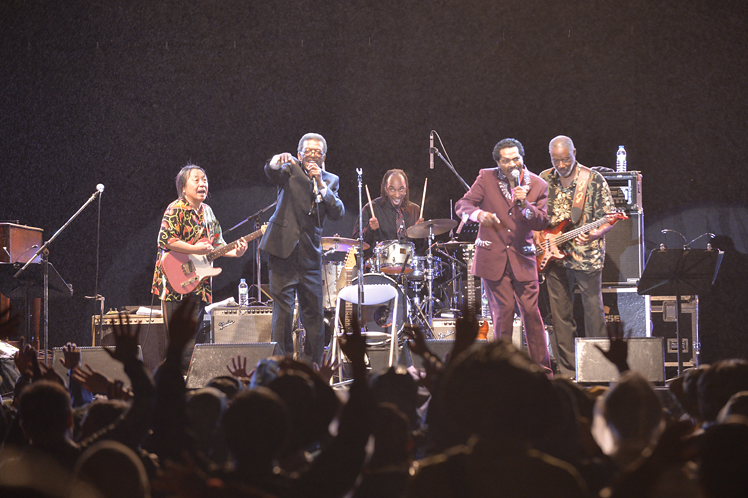 Sadly, Lavelle White fell ill and had to pull out of the show. So we’re down to two soul legends. First on is Bobby Rush. He’s sporting a purple suit speckled with what I assume are rhinestones. Killer.

After laying out his credentials, it’s time to play. He’s got June Yamagishi on guitar. He’s the Louisianna-based guitarist from Wild Magnolias, who also played on Friday as part of Soo Baad Revue. (* And turns up later on the Naeba Shokudo stage)

We’re off and running with the fantastic “Chicken Heads”. I’ve got this track on 7″. Superb blues funk. It’s a song about falling head over heels in love with a girl, with the line “When you cook that chicken, save me the head” in the middle. I’ve never worked out what that means. Is it some metaphor that goes over my head? Does he really want his woman to come into the bedroom with the severed head of a bird? Answers in the comments section please.

Then, “Thirty years ago we had a song we called Mary Jane,” says Bobby. It’s the B-side to Chicken Heads! He may have 336 records, but this one seems to be his favourite. Remember when B-sides were funky killers that could have been A-sides? Actually, remember when we bought records? Mary Jane is about what you think it’s about.

“People ask me why I got the blues,” says Bobby. “Is it because your woman left you? Yeeeees! But you can also have the blues if they stay too long.” He’s got a big cheeky grin. I wonder how often he’s used that line in his 80 years.

The drummer is a chap called Derrick Martin, best known for playing with Little Richard. He’s good at banging drums, obviously, but his true talent is an ability to leap a foot into the air from a seated position. It happens twice in the show. He’s a human flea.

Bobby growls a few more of his hits, including the cheeky “I Got 3 Problems” (those problems are his woman, his girlfriend and his wife), and a version of “Bowlegged Woman, Knock-kneed Man” that’s much, much more funky than the record, before he leaves the stage to make room for Syl Johnson.

This is the show I’ve been waiting for all weekend. I got to know Syl via digging through crates of 45s. Whether the music was dancefloor or not, I found his voice irresistible.

I found out later that his voice is on a host of other records in my collection. Public Enemy stole a melody for ‘Fight the power’ , Eric B and Rakim stole his grunts for ‘I know you got soul”, and so did EPMD for “It’s my thing”. The Wu Tangs have sampled Syl so much that he reportedly jokes that they paid for his house, and Kanye and Jay-Z have both nicked a sample from him.

He’s looking sharp in a dinner jacket and bow-tie. He starts singing “Back for a Taste of Your Love”, and one of the greatest soul voices of all time fills the Orange COurt. It’s pretty special.

He asks the crowd to join in some chants. He does the “Hey hey!” and we do the “I feel alright!” Ordinarily I don’t go in for this kind of thing, but tonight I put my snotty attitude aside and do as he asks.

He plays his biggest tracks: “Is it Because I Am Black”, “Anyway the Wind Blows”, but not “Different Strokes” unfortunately. We get “Ms Fine Brown Frame” from the early ’80s, which gives him a chance to show off his rap skills. And the man can rap.

Bobby Rush comes back to join in on Al Green’s “Take Me To The River”, and then it’s all over. Except it’s not. Syl has an encore, and gives props to Japan’s P-Vine label, the funk-jazz-soul specialists. He sings what he says was their first big hit. I wish I could tell you what it was. Either way, a nice touch at the end of a cracking show.