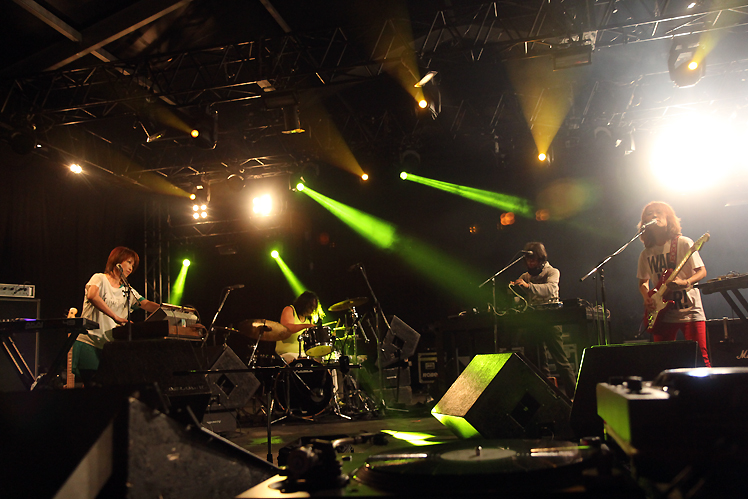 Japanese electro art rockers Buffalo Daughter celebrated their 20th anniversary as a band last year, and they have a slew of accomplishments to be proud of, including a lengthy spell in the US on the Beastie Boys’ Grand Royale label, as well as a catalogue of incredible music. Sunday night’s show marked their fourth gig at Fuji Rock, and interestingly all have been in the Red Marquee. Bass player Yumiko Ohno had also performed the previous night, Saturday, as part of Yoko Ono’s Plastic Ono Band.

Having seen all of Buffalo Daughter’s Fuji Rock performances, it seems the group has two modes. They either perform a continuous jam that is their own form of band-driven dance party, or else they go into the mode of an indie rock band and play songs. They are far better as a dance party, but tonight, playing a short 45-minute set, they were in band mode, and fairly shoegazey at that.

Buffalo Daughter opened up with the new single, “Oui Oui”, off their new album, Konjac-tioin, just released earlier this week. They also played new tracks “The Legend” and “Don’t Stop the Music.”

After one listen, it is hard to comment specifically on the new songs. The band’s music is always interesting even when it is strange or experimental, and the jammed out compositions based around keyboard loops will not disappoint Buffalo Daughter’s longtime fans. But in live performances, they are more about the whole rather than the sum of the parts. Tonight seemed more an album release than a new performance based on their substantial oeuvre. I respect them for not wanting to dwell in the past, but as a fan, I would have preferred to let them take me on a journey of electronic grooves, as they have done so many times before. Perhaps it is because over the last 20 years, they have taken a few extended hiatuses, and before last year’s fuss over the 20th anniversary, had registered several years of sparse activity. But it is also impossible to forget that Buffalo Duaghter has given us some mind-blowing, incredible, transcendental moments at Fuji Rock, and will undoubtedly do so again. Tonight however was merely a performance of their music.