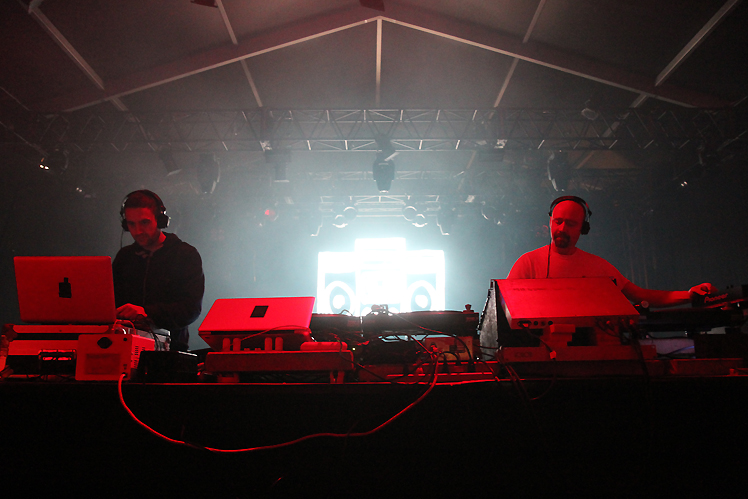 I had been waiting to see Mr. Scruff all weekend. I have been a fan of Scruff for a long time, and have always enjoyed his sets, radio shows and albums, however I had yet to see him play live. In anticipation of Fuji Rock I even managed to do a Q&A with him you can check out here. Mr. Scruff is known for playing long vinyl only sets, usually running 4 hours plus. He was only given around 2 hours to play here in the red marquee, so I was curious how he would adjust and what we would hear him play.

Scruff has a massive record collection as well as several of his own albums, including his recent 2014 album, Friendly Bacteria. His options for what to play seemed endless. I know Scruff really likes to play to his audience and playing one-off gigs or shorter sets can be difficult to get to know your crowd. I realized a few things about Scruff on this night, including why long sets really suit his style.

Scruff works in an interesting way. He begins his set as a kind of introduction of himself to the crowd, dropping some of his original tunes such as “Get a move on” and “Donkey ride” which drew the audience into a bit of a frenzy. He then does a bit of experimentation with the crowd and pays attention to how they react when deciding what to play next. For example, Scruff may play a swing tune and depending on crowd reaction he may then focus on swing songs for the next little bit. If the crowd isn’t feeling a certain tune or genre he will then take things in a different direction. This style of DJing is very attentive and definitely helps Scruff maintain a fan base. He essentially always tries to play what people want to hear from all across different music genres. This style of playing out is easier the better you know your audience and what will keep them happy and dancing. It makes sense that Scruff would fare better playing as a resident DJ in the same venue on a semi regular basis; it’s similarly why he prefers longer set times and consistently gets booked for long sets some spanning 7 or 8 hours.

For a 2 hour set and one of the final acts of Fuji Rock, I really enjoyed Scruff’s set. It had funk, soul, hip-hop, disco, jazz and more. It had original tunes, brand new tracks and classics from 50 years ago all played out on my favorite medium of vinyl. It was my first time to see Scruff live and although his 2 hour set time was longer than most I took in this weekend, it was one of the few acts that left me longing to hear more.