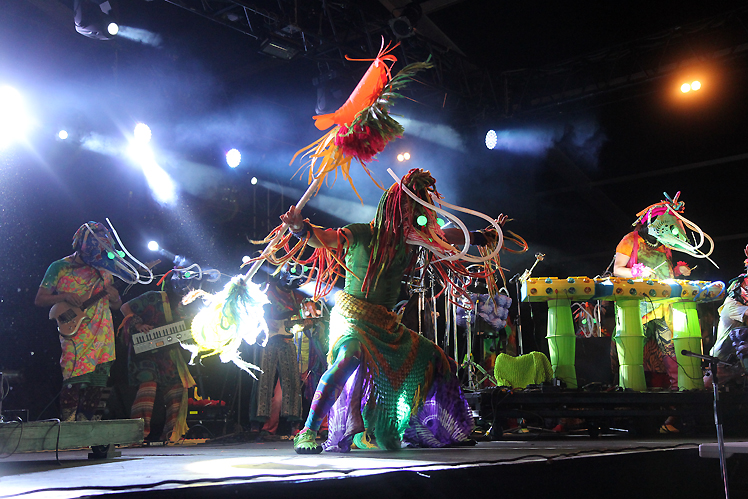 Winners of the 2013 Rookie A Go-Go competition, The Autopsy Report of the Drowned Shrimp were handed the job of closing out the Red Marquee. With the stage in darkness, the first sign of the band is lurking black shapes taking up position on stage with their cumbersome silhouettes of shrimp heads provoking cries of ‘Ebi!’ from the crowd. A tapped bass line races out of the gloom and the stage lights flare on with the band’s surge of sound, revealing the mad shapes on stage in all their glory. From there, it’s a cacophonous riot of funk, colour and all round craziness equally on stage and in the audience. With fourteen members, the band’s sound is almost overwhelming. From squeals of brass to ancient keyboard blurbs, thumping bass and roaring guitar, there’s always a pumping rhythm and a whole lot of noise.

The art-funk music the band plays is incredibly groovy and compulsively danceable but what makes it special is the total dedication to staying in-character of their shrimp personas. From their darting movements, huge head movements and the complete absence of vocals, it’s an uncanny and unreal style that makes you either start doubting your sanity or wondering if you’ve managed to pass into another dimension. They even start throwing out shrimp snacks to the audience and then follow this up by kidnapping a member of the audience to perform occult underwater rites on. The head of the mob is a virtuosic bassist shrimp, who ‘communicates’ with his unique upright four stringed bass (with more than just bass) to the rest of the band in a series of clicks and buzzed whirs. He also conducts the ensemble, taking up a giant staff and dancing around the stage, urging and commanding members further onwards.

But eventually all good things must end, and the shrimps march off one by one to the oddly stepping tapped bass, quivering with each wobble of sound. I don’t think I’ve seen anything crazier or found a more fitting way to round out Fuji Rock than with this.