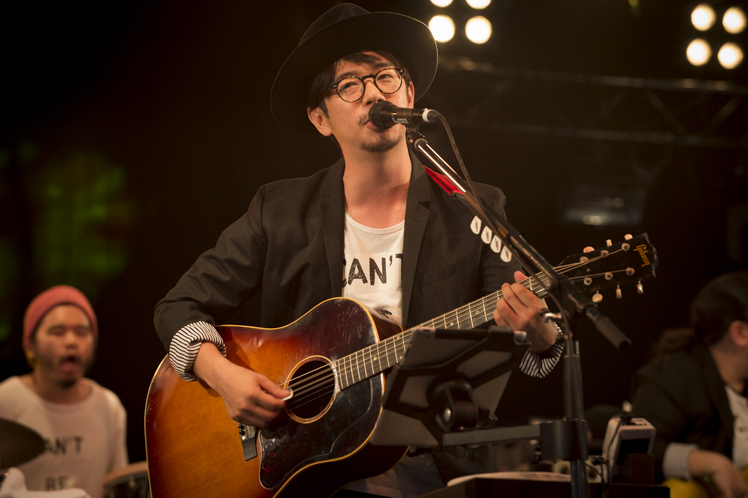 Masafumi Gotoh is no stranger to Fuji Rock. As the lead singer of the celebrated rock band Asian Kung-Fu Generation, he’s appeared all across the festival over the past decade. Whether it was being the last band on the last day at the Rookie A Go-Go in 2003 or playing the Green Stage years later, he’s been there and done that. Yet in 2014, he was starting over, somewhat – he would be presenting the festival debut of his solo project Gotch, at the Red Marquee in a late afternoon slot. It was new territory for the veteran.

Yet the Gotch set went off well to a crowded stage, Gotoh and his six-member backing band delivering a fun, stomping show that highlighted the differences between his solo effort and his main band. This afternoon was looser, with a more festival-friendly vibe. He highlighted all sorts of instruments – a melodica and bells popped up on the shuffling “Aspirin,” while harmonica appeared on several other numbers. Little details also went a long way, whether they be the super-subtle sound of turntables or the piano on the shambling “Lost.”

Ultimately though, what Gotch is really good at is rocking out. Whether that took the form of the jangly, bell-accented “Humanoid Girl” or the no-nonsense battering of “Can’t Be Forever Young,” Gotoh’s best asset is his ability to write a soaring chorus capable of getting large groups of people – even toddlers, literal toddlers – clapping along and pumping fists in the air. That’s been clear for as long as Asian Kung-Fu Generation has been around, and it carried over to his new project.

Though he did sneak in one really nice surprise. The penultimate song of the set was a cover of Chicago group Wilco’s “A Shot In The Arm,” and Gotoh and his band cut loose during the driving number, his guitarist jumping high into the air and Gotoh himself getting as close to the audience as he could. If everything before present Gotoh’s strengths in a slightly different package, this was a twist showing he was capable of absorbing new elements into his sound. If he keeps that up, he’ll be playing Fuji Rock Festivals for years to come.