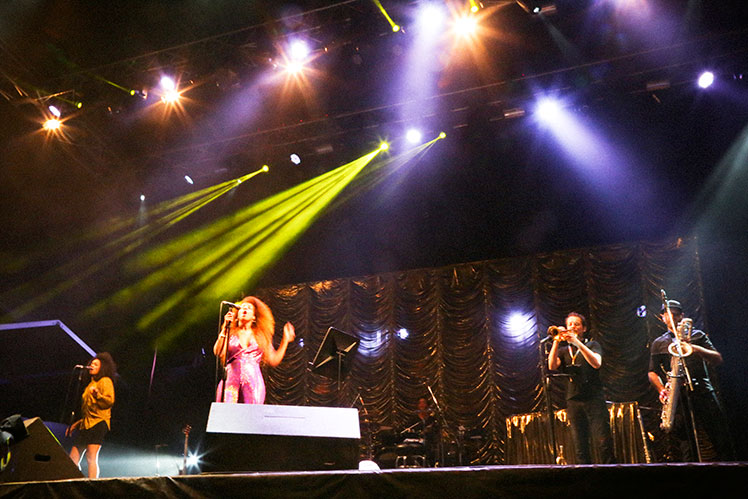 One of the many cool things about Fuji Rock is that performances always start on time. It’s a small thing for everyone to check their watches and follow the published schedule but something that very few festivals manage to consistently do. But at Fuji Rock, if a show is supposed to start at 8 pm, it starts right at 8 pm. But I guess no one told Kelis and company about this! Perhaps that is why her Sunday night White Stage set started around 10 minutes later than originally planned. Or maybe Kelis figured because it had been 14 years since she last played at Fuji Rock that no one would mind waiting an extra few minutes for her to appear.

Regardless of the reason for her tardiness, when the vocalist and her six-piece backing band finally took to the White Stage, they were greeted with large applause. Playing at the same time as The Flaming Lips and shortly before the start of Lorde meant that the audience for Kelis was a bit on the small side for a White Stage subheadliner. But the folks that were there were ready to dance and cheer for everything the respected R&B vocalist did.

Adding a heavy dose of throwback soul and funk to her sound with her new “Food” album, Kelis wowed early on as she hit a series of very high notes on “Cobbler.” The funky party continued with recent single “Rumble” and a great take of “Friday Fish Fry.” Without pause she then broke into “Milkshake,” her breakout track from 2003’s “Tasty.” Reworked to fit her current style of music, the chart-topping cut was unrecognizable at first. But once people heard Kelis’ first few sultry words they knew it was “Milkshake” and many started singing along.