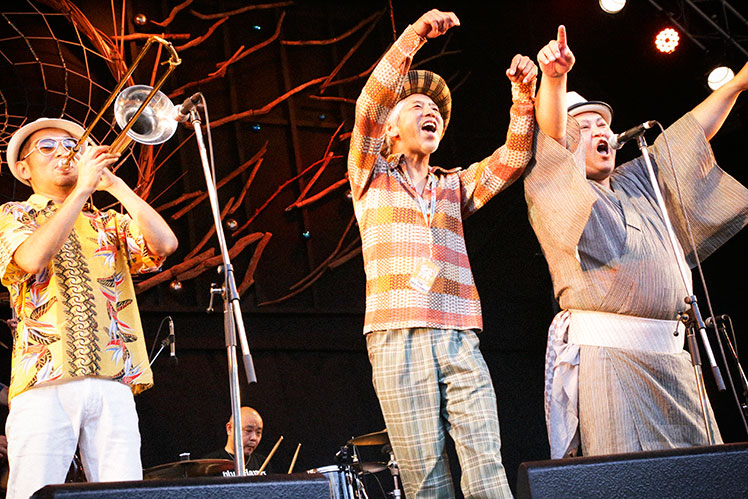 It’s Ska Sunday at Fuji Rock, with the Ska Flames, the Skatalites (yes, the original Jamaican legends!) and Tokyo Ska Paradise Orchestra forming a powerful triple shot at the Field of Heave this evening.

The Ska Flames were up first, playing just before sunset. Founded in 1985, they are legends of the Japanese ska scene and one of its founders. The band came together after seeing performances in Japan by Gaz Mayall’s band The Trojans and also seeing him DJ. Gaz went on in 1987 to produce the Ska Flames’ first record, Ska Fever. For this set, he was in fact scheduled as a guest, joining the bakers dozen of regular members on stage for three songs. This was to take place in the middle of the set, but Gaz, mercurial type that he is, somehow missed the curtain call and simply walked on during the final tune for a quick wave to the crowd.

The Ska Flames’ music is a smooth blend of (mostly) instrumental ska and reggae, powered by five horns and a rhythm section. After 30 years, they are living legends. It feels like they could have once been the house band in a Honolulu hotel in the 1970s, perhaps featured in a cutaway shot on Hawaii Five-O. To compare to American oldies, it is almost like listening to the Drifters or Dick Dale or the Ventures. They’ve moved into a moment in their careers where they are at once classic and timeless. A lively dancing crowd was more than happy to bear witness to that fact.