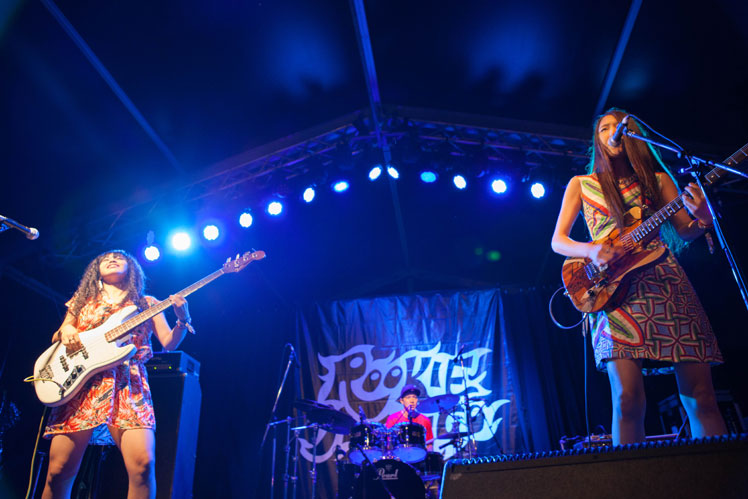 Blues sisters (by music, not by birth) Shoka Okubo (vocals and guitar), Juna Serita (bass) and Makotomo Sonohara (drums) did not have an enviable time slot on Sunday night. Their Rookie A Go-Go set took place right as Jack Johnson was finishing up, but Outkast was still in the middle of livin’ up the White Stage. On top of that the rain, which had been but a mist earlier, began to fall steadily. One might say, an ideal scenario if you’re going to play sad, slow blues. But this trio played anything but anything depressing and downbeat.

As soon as they played their first notes, all eyes were on them. Of course, the main attraction visually was the two stunning gals with long hair (that didn’t get caught in any guitar stringsーamazing) wearing mini dresses paired with super high heels. But these girls (and guy!) were, and are, much more than that. Their upbeat blues-meets-pop-rock and energy was infectious and their skills mesmerizing. (Shoka took some time out from guitar playing to join Makotomo on drums, for example.) The most impressive feat by far, though, was the five songs they played that night were written specifically for that one Fuji Rock performance! As soon as they found out they had been accepted to play on the Rookie stage, they set about writing and rehearsing, making sure their music completely new experience for every single member of the audience. These young gals have got some serious talent and aren’t afraid to show it.

As for the show, the rhythm was kept steady and true by adorable Juna, who smiled brighter than the sun had all day, and vocalist Shoka rocked amazing guitar solos between her warm and soulful vocal gymnastics. The two girls played a sassy and unapologetic set with inspiration taken not just from Nashville, but the Caribbean and one of their favorite bands, Tedeschi Trucks Band. Though short, their stage presence and funky beats stole the Crystal Palace-bound crowd from their original destination and were all the happier for it.

If only they’d had the chance to play longer… maybe next year?