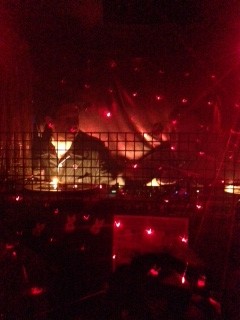 As Fuji Rock 2014 drew to a close at 5AM on Monday morning, many rushed to the Miniscule of Sound to catch one of the most anticipated performers of the festival: The Ken Michaels Brothers.

Riding on a crest of popularity from last year’s festival where they outdrew Jim West’s closing set at the Crystal Palace, many stood patiently in line to listen to the sounds of this obscure DJ duo. Some lathered up on complimentary fragrance at the adjacent bar, Brut Faberge, if my memory serves correct, trying to fool the doormen with pluck and class.

Inside, the elder DJ of the group was re-familiarizing himself with the intricacies of the mixing board, most notably the fader switch, also appearing with no prearranged playlist. Instead, randomly mixing early be-bop songs about little birds from the 50’s and switching up to better known rockers like the Ramones, “I’m Living on Chinese Rock,” or the Clash, “Clash City Rockers.”

There was also a little Buzzcocks in there with “Orgasm Addict” and similar hits from well known UK rockers. As the new day rose above the mountains and the crowd grew outside the Miniscule of Sound, many had to simply look on in envy, finding themselves on the outside looking in of what was to be an out-of-breath, schizophrenic, essential, mind warping, demonstration of rock and roll history.