Best of the Fest: Sean 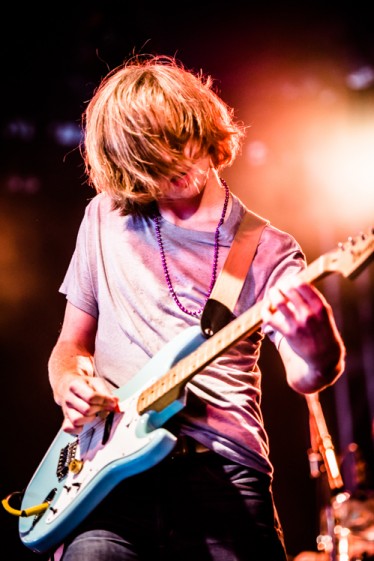 From ferocious thrash rock to bopping afrobeat and everything in between

Fuji Rock this year was characterized by pleasant weather, good vibes, and a growing coterie of side stages, NGO diversions, and hangout areas. Fortunately, the spectacle of the festival has not outgrown the on-stage performance. A good many artists, dare I say the vast majority, in my opinion, delivered performances befitting the beautiful setting.

1. Parquet Courts (Red Marquee, Friday July 25)
North American indie rock is chronically under represented at Fuji Rock each year, leaving festival goers with little chance to get their fix of hot searing shots of fuzz guitar and cascading drum beats. Well, this year it came early in the festival, Friday afternoon to be precise when a few lucky hundred sweated their way through the heat of the Red Marquee as Brooklyn-based Parquet Courts delivered all that was promised. The scene in front of the stage were an unholy stew of hippies, crusties, deadheads, hipsters, dreads, and beardos, all bopping and dancing to the angular, erratic rhythms of the next “band of the moment”.

2. John Butler Trio (Green Stage, Sunday July 27)
No artist had me more desperately awaiting a performance than John Butler. Weeks before Fuji Rock, I watched his Red Rocks performance on-line and sat in slack jaw silence marveling the heaviness of his beat and his soulful singing. I was especially anticipating his solo appearance for “Ocean” and live it did not disappoint. I, among many in the audience, we left misty eyed at the end. Though it may not be as heartbreaking as his 2010 performance at Fuji Rock, watch it here, he gets extra kudos for re-using the same stage backdrop he brought with him 4 years ago.

3) Lorde (Red Marquee, Sunday July 27)
Hard to live up to the hype, but Lorde managed to do it with skill and aplomb. Strangely, her breakout hit, “Royals” was one of the disappointments in the set, but set-closer, “Ribs” was a true winner. Extra points for name checking The Replacements with the tune, “Swingin’ Party.”

4) Disclosure (White Stage, Friday July 25)
Wow did I enjoy this set. Disclosure’s performance was pure 3-D sound, creating new hooks and beats that used to be the calling card of the Chemical Brothers some 10 years ago. Three intensely high definition screens were set up behind the Lawrence brothers, a minimalist backdrop for their slap heavy bass lines, bright percussive beats, and other synth sounds. It’s only a matter of time before they start filling stadiums.

5) Jungle By Night (Palace of Wonder, Saturday July 26) I had absolutely no idea who this 9-piece Amsterdam band was before I entered the Crystal Palace. Somehow, the preshow hype told me I had to get inside the Speigeltent a few minutes early, and mentally prepare for a night of sweaty magic with music bouncing from afrobeat to swing, dance and bop. These twenty-nothings proved they have the chops to hang with the best artists of this genre, and their infectious, testosterone spiked energy peaked and ebbed, spewing beautifully across the face of audience members from the front to the back.