Best of the Fest: Dave 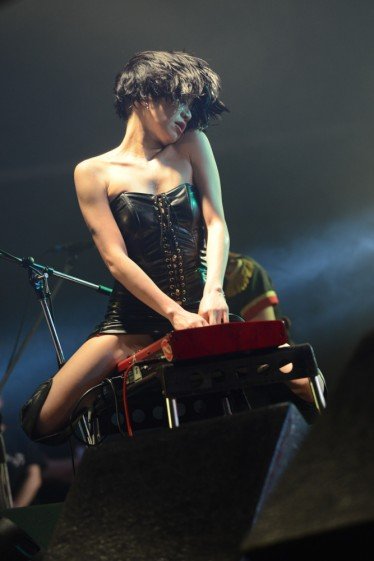 “Best of the Fest” presupposes that the festival is all about the acts themselves, and while most longtime Fuji Rockers like myself believe the event to be rooted in something much deeper – a sense of community – I will play along, because everyone loves “best of” lists. So here is mine for 2014.

#1 OUTKAST
It was all that fish and grits and all that pimp shit, and even better since expectations were mixed after their reunion got off to a rocky start at Coachella, but by this point in the tour, there were no more lack-of-rehearsal issues. Andre 3000 and Big Boi absolutely killed it. Also, for me, a Fuji Rock first: grinding at the White Stage. Where did that come from?

#2 THE BLOODY BEETROOTS
They had the entire Red Marquee jumping for 75 minutes straight. They had a grand piano. They stopped all their electro bangers to play a rock ‘n roll boogie woogie with guitar, bass and drums. And everybody still went crazy. And when it was over, all you could say was, WHOOP! WHOOP!

#3 ST VINCENT
Heavy on theatrical presentation, though still 100% about the music, this was a big-time return for arty rock. And in an overheated Red Marquee, St Vincent was still cool as ice. Seldom are pop songs this breathtaking.

BEST DJ SET: GOLDIE
It has been a long time since d’n’b has sounded this fresh and this poignant, and was also somehow not at all dude music for violent dancing in some dark basement, but up and fun and full of life. Metalheadz reprazent!

BEST J-BAND: AUTOPSY OF A DEAD SHRIMP
14 people in shrimp costumes made from purchases at the 100-yen store. A ritualistic dance led by a ju-ju shrimp man. Crazy dancey synth tunes that mysteriously sounded to me like the theme song from Sanford and Son. Call it pure neo-tribal-retro-futuristic weirdness or call it what you will. It was all that and more.

BEST ACTS I MISSED: JOHN BUTLER TRIO, LORDE, JUNGLE BY NIGHT
At Fuji Rock, this is an unfortunate category but a consistent one. Sometimes I wish the festival were less hectic, or that they would do something really radical, like suspend all performances from 5-7pm one day so everybody could hang out together, instead of racing from stage to stage trying to pack it all in. You always miss something, and though I note it, I do not necessarily regret it. I hope everyone enjoyed 2014. I sure did.