Best of the Fest: Patrick 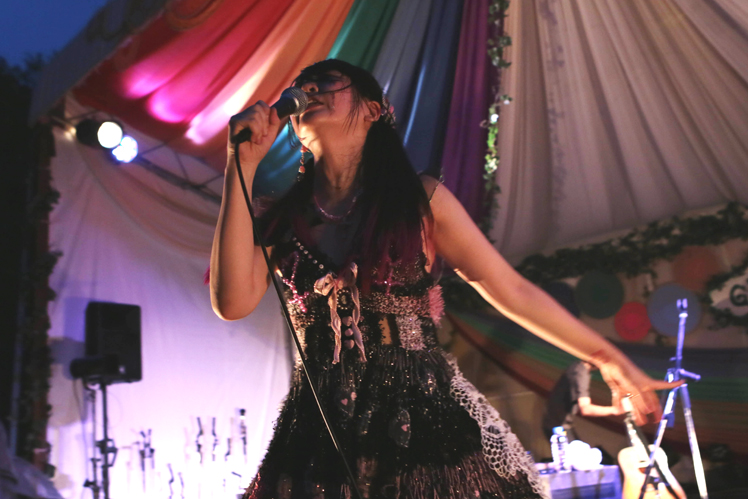 I’m not the sort of person to normally relax at a festival. At Fuji Rock that’s somewhat expected – I have to watch certain acts, and write about them, so an element of on-the-job-ness is always present – but even when I’m simply at a fest for fun, I’m making mental schedules and dashing between stages to see everything I can. Rarely can I just shut off, sit back and enjoy whatever’s in front of me.

Which is why this year’s Fuji Rock was such a surprise for me – it was the most easy-going three-day event I’ve ever been to. Chalk it up to good spacing between acts and the fantastic weather, but the weekend breezed by. But not without some top-notch sets, the bulk of which excelled because they were designed for the mass-music-happening crowds.

The lead singer of Asian Kung-Fu Generation debuted his one-man project at the Red Marquee this year, backed by an assortment of skilled Japanese indie musicians. He delivered a rompin-stompin’ set heavy on the dramatic choruses and clap-along moments. What put this one over was his cover of American rock outfit Wilco’s “A Shot In The Arm,” a driving number that saw him and his band getting especially wild.

We got to eat ice cream at the end of this one, of course it was a highlight. Oh, she was also charming as heck.

About as well crafted for a festival audience as these two English brothers could get. Their White Stage performance featured eye-catching visuals, great sound and all the highlights from this duo’s debut album Settle. Disclosure have also made it a priority to become showman live as well, which was well visible at Fuji Rock – they smacked synth pads, tapped away on bass and even made operating a sampler look like intense business.

Man, how fun was this? There’s always the lurking fear with these sort of reunion gigs that it’s pure money grab, that the performers involved are phoning it in and not enjoying the experience. Outkast, though, looked like they were having a blast up there. Part of it appeared to stem from the fact there was a clear translation issue – a lot of the beloved rap duo’s commands and banter were lost on big chunks of the audience. Instead of get frustrated or self-sabotage themselves (I’ve seen that before, and it’s the ultimate bummer), Atlanta’s finest rolled with it and got goofy. Highlights include Big Boi shouting “gozongas” numerous times, along with him and Andre 3000 just trying to crack one another up throughout the evening.

Oh, and the music, of course. They touched on the necessary big moments (“Hey Ya!,” “Ms. Jackson,” “Rosa Parks,” “B.O.B”) and also dug deep into their song catalogue. As far as big, fun, festival-defining romps went, this was tops.

Thing is, those populist sets aren’t always the ones that stay with you the most. As relaxing and fun as Fuji Rock 2014 was for me, I couldn’t shake Oomori Seiko’s Friday set at the Gypsy Avalon from my head, regardless of how hard I tried to shake it like a Polaroid picture. Her performance was the total opposite of everything above – she aimed to confront the crowd instead of deliver a good time, which goes against what the modern music festival sets out to do. I loved it. Seiko screamed, whispered, ran around the stage and played songs that seemed ready to collapse in on themselves at any second.

Regardless of how much fun I had at the following sets, it was Seiko’s performance that I turned over the most, and the one I’ll remember most from Fuji Rock 2014.