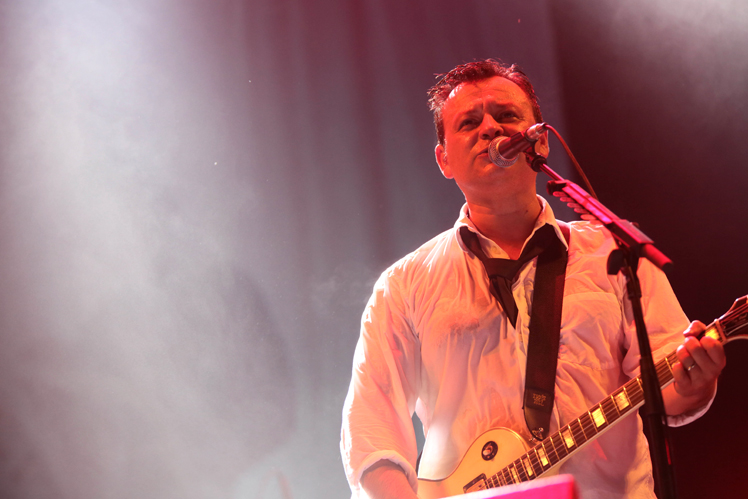 The Manic Street Preachers were once the most important band in the world. It was 1992, and probably 1993 as well. Generation Terrorists came out, and nobody else was making music and giving interviews like these boys from Wales. I bought a CD single of Motorcycle Emptiness and listened to it on repeat-1 for months and months. I know every word to that song, though I do not have any idea what it’s about. Who cares. It’s still one of the greatest rock tracks of all time.

Around that time I saw them live for the first and, until today, only time. It was at a festival in England. I can’t recall which one. But I remember the show so well. Nicky Wire’s splits. James Dean Bradfield bending down to the stage, and singing every word like he would die for it.

I thought back then that this is the only band that sounds as good live as on record. There are, obviously, others, but the Manics made me all giddy and hyperbolic.

Here they come! There are 5 of them! I thought there were only three. One doesn’t have a spotlight on him, so I suppose he doesn’t count anyway.

And blow me if they don’t open with Motorcycle Emptiness! I thought I’d have to wait an hour or more to hear that. But they’ve started with their greatest track. And bloody hell they still ROCK! James Dean Bradfield still looks like a bank manager gone bad, and the expressions, the passion, the energy he delivers… this is what grabbed me 20 years ago. Nicky Wire still looks like Keith Richards crossed with Beetlejuice, and he’s still doing the splits. The Manics haven’t aged nearly as much as I have since we last met.

This isn’t a band milking nostalgia. They’ve got rock in their blood and they’re performing like this is the only show that ever mattered to them. Motorcycle Emptiness sounds just as fresh as it did 22 years ago. I’m going to download it and reacquaint myself with it. All the people that chose to watch Arcade Fire instead made the wrong call.