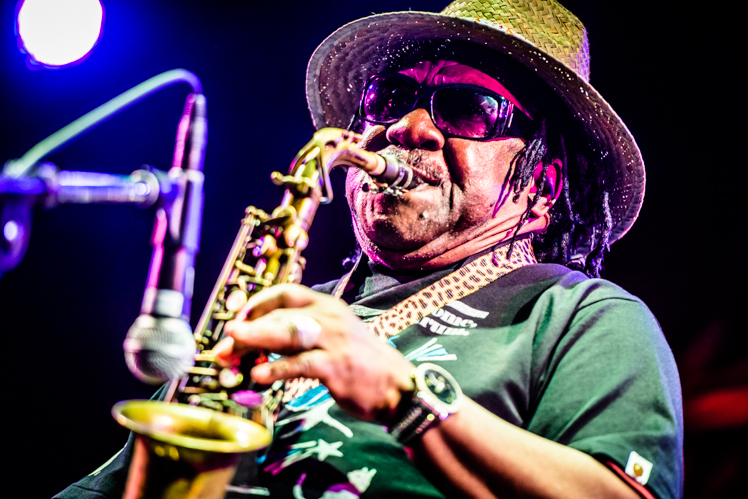 Gaz Mayall filled the role as hype man in a broad rimmed hat and a huge smile. He implored the audience to give it up to the “Emperor and Empress of Ska”. And soon thereafter, one of the best known bands in this genre took the stage.

Band leader and sax player, Lester Sterling, implored to start the countdown ” 4, 3, 2, 1, Freedom” soon launching into well known crowd favorite “Freedom Sounds.” The audience in front of the Field of Heaven soon erupted into a sea of dancing bodies.

Some may despair that this is not the original lineup, but how could you expect a band to be together for 50 years? Surely age would catch up to them just like it hampered others. Still, Lester Sterling seemed quite sprightly at the front of the stage, and the seated bassist, Val Douglass, matched well with younger members of the band.

But of course, everyone was waiting for the grand dame of ska to emerge, Doreen Shaffer, as she instantly led credibility to this group, singing a total of 3 songs such as “My Boy Lollipop” and “Sugar, Sugar.”

And then it was “Guns of Navarone” and then a bit of reggae as the tempo slowed and the band got deep and groovy. It was quite a long set by festival standards, stretching for an hour and a half, so there was definitely a need for a change of tempo.

At the end of the show, the MC appeared and introduced each member one by one, explaining that Skatalites were celebrating their 50th Anniversary this year, that’s certainly a lifetime of music and good fun.